Pioneer of ENT surgery in the Midi-Pyrenees region.


Dr. Honoré CAVE was a pioneer of ENT surgery in the Midi-Pyrenees region. He moved to Montauban in 1937. He volunteered as a doctor, signing up in 1940, and was awarded the Croix de Guerre. During this period, Honoré CAVE was the keen collaborator of Professor Acosta, a Spanish refugee who was the renowned head of the ENT department of the hospital in Madrid.

At first, Dr. CAVE practiced as a surgeon in the city centre. He set up his own clinic in 1957 on the current site. The clinic became autonomous in 1973, combining ophthalmology with ENT, thus becoming one of the first specialised clinics.

Honoré CAVE was head of the ENT department at the hospital of Montauban, working as a private consultant. Very early on, he initiated public-private cooperation. This partnership has continued until the present day, especially for the treatment of ENT and ophthalmic emergencies. 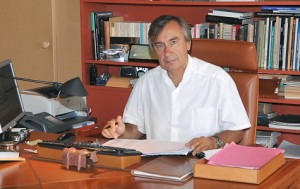 In 1983, his son Jean-Pierre CAVE, an ENT surgeon, gave new impetus to the establishment while remaining true to the original spirit. The clinic, which he now co-directs with his sister, took the name of Clinique Honoré CAVE, thus paying tribute to its founder.

During the same period, ophthalmology has developed considerably, primarily in anterior segment surgery and then that of the posterior segment, with the very recent addition of two specialist retina surgeons, making the facility a reference in this field. This hyper-specialisation has placed the Clinique Honoré CAVE among the leading clinics in France.

The facility has been constantly modernised in recent years. The last part, which has just been completed, has improved access to the clinic, the efficiency of the outpatient department and the surgical units and has raised the level of comfort in the rooms.

True to the family spirit, the directors have always sought to combine the demands of high level technology with the tradition of human warmth that has made the reputation of this establishment.

The entire medical team helps to ensure the reputation of a clinic that has managed to keep its family character.